The world’s leading oil producers are preparing for the possibility of oil prices halving to $20 a barrel after a second day of financial market turmoil saw a fresh slide in crude, the lowest iron ore prices in a decade, and losses on global stock markets.

Benchmark Brent crude briefly dipped below $40 a barrel for the first time since February 2009 before speculators took profits on the 8% drop in the cost of crude since last week’s abortive attempt by the oil cartel Opec to steady the market.

Russia and Saudi Arabia – the world’s two biggest oil producers – both increased spending when oil prices rose to well above $100 a barrel. The fall from a recent peak of $115 a barrel in August 2014 has left all Opec members in financial difficulty, but Saudi Arabia has refused to relent on a strategy of using a low crude price to knock out US shale producers. Hopes that Opec would announce production curbs to push prices up were dashed when the cartel met in Vienna last Friday, triggering the latest downward lurch in the cost of oil.

Weak export figures from China triggered the early fall in the price of oil and industrial metals on Tuesday. Iron ore’s 10-year low was accompanied by declines in zinc, lead and nickel, leaving mining companies to bear the brunt of a renewed sell-off in equity markets. 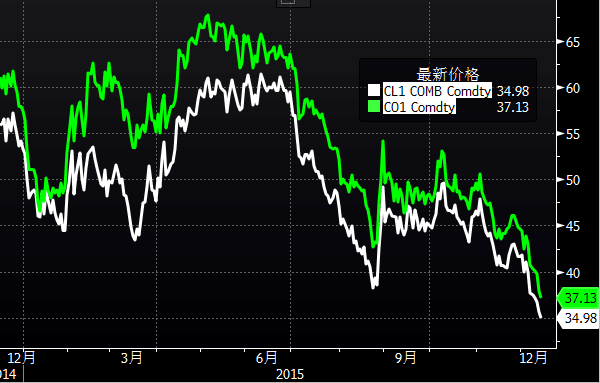 Today oil is cheaper than water in US